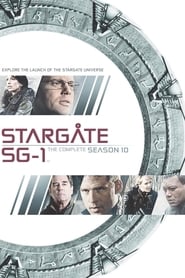 As the team embarks upon its tenth year, Vala, a former Goa’uld host turned freedom-fighter, joins SG-1 in their battle to defend the galaxy from the holy war of the Ori. Having discovered the existence of a weapon capable of defeating the Ori, the team is now in a race against time to find it before more systems fall to the influence of the Priors and the threat of the newly arrived Origin fleet.

The season is continued with direct-to-DVD film Stargate: The Ark of Truth.